Steroid injections for low back pain

The Cochrane review on injections for low back pain concludes: “There is insufficient evidence to support the use of injection therapy in subacute and chronic low-back pain”. The injections contain corticosteroid (‘steroids’, ‘cortisone’) mixed with local anaesthetic and are injected into the epidural region or the facet joints of the lumbar spine. The injections have been compared to placebo injections and to other treatments and, without going in to all the detail, they basically don’t work.


But that’s back pain you say. What about radiculopathy, where patients have a “pinched nerve”? Surely the corticosteroids will reduce swelling and reduce pain? Well yes, most patients do get better after these injections. But again, they are no more likely to provide relief than a placebo injection (here).

But surely some studies show a benefit to these injections? Again, yes, but those studies are usually not ‘blinded’ and do not use a true placebo, so we are not allowing for the placebo effect and the other reasons why people get better without treatment.

How big is the problem? There are hundreds of thousands of back injections performed each year worldwide. It is routine practice for general practitioners and spine specialists, and it is big business for interventional radiologists. In the US, the rate of epidural injections in the Medicare population increased more than three-fold between 1994 and 2001 (here) and more than doubled in the 10 years leading up to 2006 (here). The increase in costs per injection means that the cost of spinal injections has increased several hundred percent (here). Graphs like this one highlight the problem (reference): 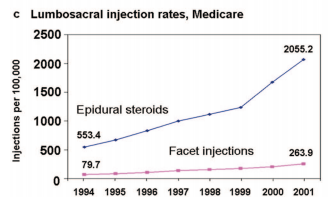 We are witnessing an increasing divergence between the growing evidence that these injections do not work, and the growth in the number of these injections being performed. There are many likely explanations. Firstly, it is standard practice, so it is easy to justify; if everyone is doing it, then you cannot be criticised for doing it. Also, as I have said before, patients want some kind of treatment and at least the doctors feel as if they are “doing something”. Most doctors probably believe (from what they see, from tradition, and from wishful thinking) that the injections work. Like Bruce Willis in The Sixth Sense, doctors are ‘seeing what they want to see’. They give the injections and some patients feel better afterwards, and they impute cause-and-effect. Very human of them, but not very scientific. The science tells us that they were just as likely to get better with a placebo. Also, of course, a lot of people are making a lot of money from these injections.