When you raise your arm, the top of your humerus, where the rotator cuff tendons attach, “impinge” against your acromion. When this hurts, it is called impingement syndrome. “Decompressing” the joint by taking some bone off the acromion (an "acromioplasty”) makes sense, and seems to work well. The operation has been around for a long time, and there have been many studies looking at different ways of doing this operation, but very few studies looking at whether or not it works better than not operating. Interestingly, all of the studies that have been done conclude that this operation adds nothing.


I did a lot of these operations in my training and got quite good at it. When I later saw patients with impingement, I knew what to do - operate. Fortunately for me, there were no randomised trials on acromioplasty when I started practice (in the mid-90s) so I could carry on doing what everyone else was doing. Fortunately for the patients, somebody questioned the role of acromioplasty and did the studies needed to determine the relative effectiveness of the procedure.

The role of acromioplasty for patients with impingement (with or without a rotator cuff tear) was examined in a Cochrane review published in 2008, covering the literature up to March 2006. Of the 14 trials included, 3 specifically compared acromioplasty to non-operative treatment in patients with impingement and 1 trial looked at the effect of adding acromioplasty to surgical repair of a rotator cuff tear. There was no significant improvement in pain relief or shoulder function from acromioplasty in any of the studies. Some patients randomised to non-operative treatment ended up undergoing surgery because of poor results, but (when reported) they had poor results with surgery too.

Also of note, is the observation that it didn’t matter much how the surgery was performed (open versus arthroscopic).

What about studies that have been published since this review?


I should note that although the studies are unanimous in their finding that there is no advantage in performing an acromioplasty, there was usually a small benefit in the acromioplasty group compared to the non-operative group, just not a statistically significant benefit (i.e., the difference observed may have been due to chance). Because of differences in the studies, the authors of the Cochrane review couldn’t combine the results (meta-analysis). It should also be noted that the methodology in these studies in generally low, meaning that there is a risk of bias, which usually favours the intervention. So we don’t know if the small benefits seen were due to a real advantage of acromioplasty, due to chance, or due to bias.

It might also be time to stop performing acromioplasty, because although these studies have been coming out since the 1990s, the rate of acromioplasty doesn’t seem to be going down, at least not according to this Medicare Australia data (link here) (which only covers private patients, of all ages – different to the US version of Medicare). 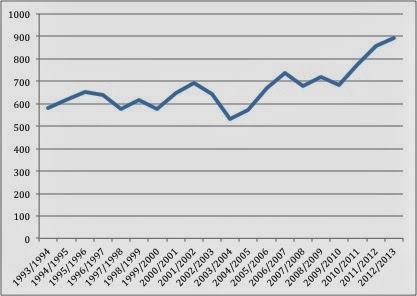 Addit: The Cochrane review on this topic is currently being updated and I will add the link when it is published.