Allow me to make an assertion: breast cancer survival is not influenced by surgical excision of the primary tumour. This goes against the prevailing wisdom that cancer is cured by removing it, but that kind of thinking is simplistic and at odds with much of the evidence. Lets walk through that evidence.


There is a theory that breast cancer is a systemic, rather than a local disease, and that local control (by surgery) does not influence the course of the disease regarding its ability to cause death. The common thinking about breast cancer is that it starts in the breast and spreads such that if you remove it early, and completely, you can be cured. This is the basis of breast cancer screening, but as I have discussed before, there is debate about whether screening reduces one’s risk of dying.

Note that I am referring to overall or all cause mortality, rather than disease-specific mortality. For more on the important difference between these, see my blog on how you die versus if you die.

If survival after breast cancer is influenced by local excision (surgery), then the following statements should be true:

1. “The wider the margin, the better the cure rate”
We already know the folly of the "more-is-better" radical mastectomy (see my previous post). These days, the arguments are about much smaller ‘margins’ (how close to the tumour is to the surface of the excised lump) and usually refer to local recurrence, where the prevailing wisdom is that wider margins make local recurrence less likely. Avoiding local recurrence is desirable, but it is a different thing to all-cause mortality (overall survival). But even if you are talking about local recurrence, it appears that margins of 10mm, 5mm, 3, 2, and even down to 1mm all have similar recurrence rates (discussion here). Regarding excision of the associated (axillary) lymph nodes, overall survival is not improved by excising the lymph nodes when they are not involved (no cancer found in them). Other studies (here and here) show that even when patients have cancer in the lymph nodes, excising the axillary lymph nodes does not improve overall survival (but it does result in more complications). Interestingly, in both these studies the survival was a little better in patients who did not have the cancerous lymph nodes excised. Therefore, the statement above cannot be supported.

2. “Incomplete excision will adversely affect survival”
Similar to the case with cancerous lymph nodes, having a complete excision of the tumour or leaving some behind makes no difference to the overall survival (here, here, and here). And although the measurement of margins is not all that exact, it does appear that they are an accurate measure of the amount of tumour left behind (here). Therefore, the statement above cannot be supported.

4. “Non-operative treatment will have a higher mortality rate than surgical excision”
Unfortunately, there is no randomised comparative study to report, but there are some interesting studies out there, like this one, that estimated that most breast cancers, including invasive cancers, would regress if left alone.
In older patients (over 74), non-operative treatment has been tried, and most patients die with their breast cancer than of their breast cancer (here).
This study looked at patients that refused surgery for their breast cancer. 41% were still alive after 5 years, compared to 61% in a similar group who had surgery. The two groups being compared, however, were not otherwise equal. For example, patients who refused surgery, had almost no other treatment (apart from Tamoxifen), whereas at least half of the “similar group” who had surgery, also had other treatments such as radiotherapy and chemotherapy. Also, most people who refused surgery did so because they thought they were too sick to withstand the surgery or because of other health problems, so I could make an argument that the background mortality for this group would be higher than the “similar group” who thought they were well enough for surgery. There may be other factors in this non-randomised study that explain the (surprisingly small) difference in survival; people who refuse surgery might do other things that are not good for their health (like not taking their heart pills, for example). The figure below is taken from this study. It does not convince me that surgery was responsible for the difference between the two lines on the graph. 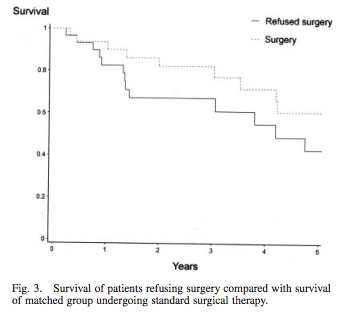 
The argument for overall survival being influenced by local (surgical) excision of breast cancer is not strongly supported. For most of the comparisons provided above, although there was no difference in overall survival between the treatment groups, those with more local treatment (like having complete margins or adding radiotherapy) had less local recurrence. This means that local treatment, like surgery, does something (it provides local control), but that “something” may not extend to reducing the risk of death.
Posted by Dr Skeptic